Why has my question gained an oddly high number of views?

I'm still fairly new to this Stack, but I've been trying to get involved with writing good questions and answers, and I decided to ask a question that had been on my mind for a while.

Relatively quickly, it got an answer that pointed out I had mis-remembered the relevant passage in Genesis, and that the answer was clearly in the text. I accepted the answer straight away (without waiting 24hr), because I didn't see much point in leaving such a simple question open.

Today, I've discovered that the question has earned me the "Popular Question" badge, as it's had over 1000 views. Looking at other new questions, that's order of magnitude higher than the average question, which barely reach 20 views. Given it was answered relatively simply, it doesn't feel like a question that deserves such an anomalous number of views.

Can anyone with more experience on this stack, and possibly access to statistics (if such things exist), suggest a reason why this question in particular has been viewed so many times?

It became one of the Hot Network Questions.

The exact criteria for a question to become a hot network question is complicated, but if a question gets quite a few votes as well as (I think) at least two answers which also get a few votes, then it has a chance to become a HNQ, which will then be shown on other sites in the network. 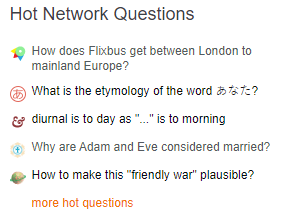 6
Closing questions and welcoming new members to the community
2
Should flip-side and different denomination-based questions be linked as related?
2
Answer to Question on Hold: Reputation and History Vanish
11
Are exploratory questions (i.e. ones that develop new theology) off topic?
5
Guidelines for retagging
10
What are some good places to get Christian questions answered?
0
How to balance open-ended vs closed-ended nature of questions?
4
What’s wrong with my question?
17
Exercise your right to vote!
236
Brothers, I must go…