Does the extraordinary response to the "Brothers, I must go…" post reflect an underlying anti-trans sentiment at Christianity.SE?

Since Brothers, I must go… was first posted, I've read and re-read it multiple times. When you're transgender like me, certain parts are a ghastly read (despite the eloquence). The day I first read it, I truly expected it was simply a case of "having a bad day" (days which I absolutely have myself) and I moved on thinking "I'm sure there'll shortly be an apology, and we'll just move on". But the post stayed there; it was modified, but nothing to even cover the awful words towards trans people [they're still there now], and if there was an apology I missed it.

I'm still hopeful this attitude will change. I'm still willing to chalk this up to a "blip". I'd probably shed happy tears to see a follow-up post along the lines Brothers, pronouns are just basic dignity.... But maybe that's still years away.

What particularly stings is that its author is someone I've held in high esteem for years. It's the pioneer of secular religious sites writing

If you are more inclined to resent rather than celebrate the differences between us, then this may not be the site for you

then effectively adding a footnote saying "excluding trans people; we don't celebrate that". It's a role model saying that people like me... our whole existence is fundamentally fraudulent, and now becoming a role model for those who oppose my very existence. Ouch!

Anyway, the reason I'm here is to get a better gauge of how reflective the Brothers, I must go… post is of the community's attitude. Two points:

Question: Does the extraordinary response to the "Brothers, I must go…" post reflect an underlying anti-trans sentiment at Christianity.SE?

What I've seen over and over for the last month: I'm forced to use "preferred" pronouns (or words to this effect). Now that the wisespread outrage has died down significantly, I'm hopeful people can put this in perspective, e.g., perhaps compare it with how we're all similarly forced to use "preferred" non-antisemitic terminology (where we think of it as good manners). Or perhaps reflect on how much the deck is stacked against transgender people (see e.g. Injustice at Every Turn, 2011) and whether or not we want to add to that at Stack Exchange.

Then they came for the transgender people, and I did not speak out joined them —
because pronouns.

But I am worried this is just underlying anti-trans sentiment, plus a cover story.

I think that this question, in its very statement, has to be regarded as a matter of opinion.

Specifically, as the question asks about 'an underlying sentiment'.

Suspicion of insincerity is what is being conjectured.

Personally, I saw massive respect being shown for someone who had - voluntarily for a number of years - performed a valuable service to a community.

Personally, I saw massive sympathy being shown towards someone who was prepared to resign from a position, of considerable honour and respect within the community, on a matter of principle.

Personally, I saw massive empathy being shown towards someone who acted in conscience, choosing to maintain their principles rather than do what they, themselves, felt to be wrong.

That response was, indeed, as the OP above states : extraordinary. Out of the ordinary. Beyond what is - ordinarily - witnessed.

I do not, personally, suspect there were ulterior motives or underlying sentiments.

Because none of these were being expressed.

What was being expressed was a vote. That vote was a response : a response to someone who acted in conscience. And did what they felt they had to do.

Such actions are always impressive. The actual issue lies in the background. It might have been any issue. We can tell that that person would have responded in exactly the same way, whatever the particular issue might have been. What comes to the fore, in cases such as these, is integrity.

I believe the extraordinary response was a response towards conscientious integrity. And I saw, myself, no hint of hypocrisy and no hint of underlying insincerity whatsoever.

I'm sorry this is still affecting you. I just gave Caleb's post another read, and didn't really see it as implying "excluding trans people", which is not to say that the way I read it is more right than how you have read it.

I'm not a mod here, and I don't speak for anyone but me, but here is how I see the community as a whole currently:

Many Christians would say that one of the central messages of Christianity is that there are aspects of all of our identities that are corrupt and harmful, and that the solution is to give up both our family and community given identities as well as our self-identities, and instead find the new identities given to us by Jesus. I know that this could sound very confronting or even offensive to anyone who is queer and/or who has had to stand against the identities that others have tried to force onto them. I believe that it is healthy for all of us, queer or not, to be able to own our identities and to feel free to express ourselves in ways that are consistent with our identities. But I also believe that the hope of the Gospel gives us freedom: from the tyrannies of identities forced onto us, from the anxieties of self-determination, and from the guilt and shame of not living up to our identities (where external or internal).

Thank you for engaging with us here. If you are willing, please do continue to highlight the problems in our community so that we cannot be blind to them.

The evidence I have indicates: No.

TL;DR: Being objective for a moment, I test the hypothesis in the title of the question using the evidence available to me. If there is underlying anti-trans sentiment at Christianity.SE, then it either comes from (a) on-site users, who we'd expect are currently present and are able to express transphobia or (b) off-site users joining up to express transphobia.

I reject (b) using a data explorer query. I reject (a) based on my experiences here. Thus, I have to reject the hypothesis in the title of the question.

I'll put my "objective scientist hat" on for a moment. Let's begin with formalizing the hypothesis...

Hypothesis 1: the extraordinary score of the Brothers, I must go… post is largely due to anti-trans sentiment.

And we'll need these auxiliary hypotheses, which are addressed along the way...

Hypothesis 2: a bunch of transphobes joined Christianity.SE to upvote Brothers, I must go…, and otherwise do not care about it content.

Hypothesis 3: a bunch of transphobes already existed at Christianity.SE and upvoted Brothers, I must go…, and otherwise do not care about it content.

From this data explorer query, I made this plot of the number of new users per day at Christianity.SE during the period surrounding the Brothers, I must go… post. 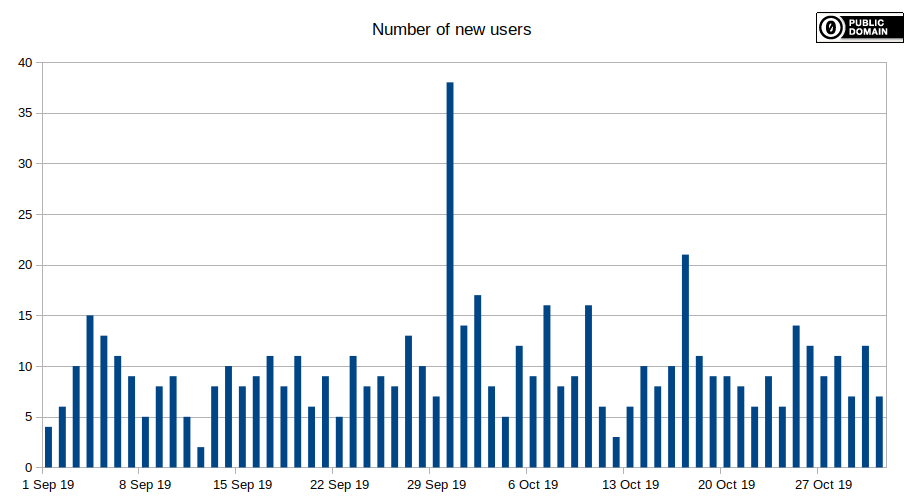 (Image declared as belonging to the public domain prior to uploading to Stack Exchange. Image sources: postimg; imgur; imgbb. [Imgur is blocked for many people, so this is my workaround.])

It's thus reasonable to conclude that the bulk (in the ballpark of 80%) of the upvotes for the Brothers, I must go… post came from users who already had accounts at Christianity.SE. Thus Hypothesis 1 implies Hypothesis 3, which implies (by contraposition) if Hypothesis 3 is false, then Hypothesis 1 is false.

To begin, disproving Hypothesis 3 amounts to proving a negative. Despite many people claiming that this is impossible, You Can Prove a Negative. In particular we'll use this method:

I use my experience at Christianity.SE as qualitative evidence. This evidence is arguably not most reliable, but it is the best available evidence.

The evidence I'm going to use is (in a sense) a single data point (i.e., me). However, I believe it is more accurate to perceive it as many data points (i.e., the people interacting with me at Christianity.SE). Moreover, this is not merely anecdotal evidence, since it can be verified by other users.

Now, if Hypothesis 3 were true, it stands to reason that:

More generally, Christianity.SE users have had opportunities to express transphobia. If Hypothesis 3 were true, a large amount of transphobia would be visible. It is not.

There are some fundamental differences in worldview here, which probably cannot be reconciled (I certainly shan't attempt it).

I can see where Caleb is coming from (I need to squint a little, but I can see it). This is a site where two different Christians, who each think the other is destined to Hell, are expected to hang out together and to be civil to each other and also to Christians who don't think that there is such a place as Hell, and to atheists, and to members of other religions. And, by and large, it works, which is quite extraordinary. I can see why he thinks that the issue of pronouns is relatively trivial in that context, though certainly his initial choice of wording was extremely unfortunate.

If we can disagree on so much and still get on, why not on this too?

And yet, I come down with you on this one. I think that Caleb's opinion on trans issues is not only wrong (I think he's wrong on a lot of things), but illegitimate. There's a difference here, and it's what actually makes this a far far bigger deal than Caleb at first understood, though perhaps he's beginning to get it now. It is perhaps an axiom of my worldview that you don't get to have an opinion on other people's identities. Caleb thinks you're not a woman. He's wrong, of course, but I'd also say that he doesn't have standing to express (or even, really, to have) an opinion on this matter.

This disagreement is actually far more personal (and hence far more strained) than what might at first seem to be far bigger ones about Hell and God and suchlike.

(Incidentally, this slightly relates to one of my personal bugbears. I hate mindreaders. I hate it when people try to tell me what I am thinking, on any issue. Tell me if my actions distress you, and perhaps I'll try to change, but I'll tell you what my motivations are.)

Returning to your actual question: are a majority of the users on this site transphobic? I don't know, but it wouldn't surprise me. We have quite a lot of conservative Christians here, and I'd say that most of them are transphobic and homophobic. Speaking as a gay atheist, I can say that homophobia is actually mostly okay: many individuals here are homophobic to greater or lesser extents, but the site as a whole isn't, because of the way it's structured. The difference, of course, between homophobia and transphobia, is that no one here has ever tried to tell me that I'm not actually gay.

104
Brothers, we are not Christians‼
9
Would you like to share your story?
2
Is there any appropriate way to share humorous sermons?
0
About the answers on this question?
250
Brothers, I must go…