Proposal: Change our masthead to read: "about CHRISTIANITY"

Compared to other StackExchange sites, Christianity.SE has a very high percentage of closed questions, as pointed out and discussed in this Meta post: Why does this site have such a high percentage of closed questions? This indicates a high level of misunderstanding about this site and its purpose among new users. One of the answers to that meta post, by a relatively new user, suggests that much of this misunderstanding is a result of this site being mis-branded.

As a modest step toward correcting that mis-branding, I would suggest that in our masthead, instead of having "Christianity" by itself, we add in smaller letters, perhaps above and offset from the main title, the word "about," so that it reads something like this:

This would be a tip-off to the actual nature of the site: that we are not a Christian site (see: Brothers, we are not Christians‼), nor are we a Christian discussion site, but a site whose purpose is to answer questions about Christianity.

In other words, such a change to our masthead would suggest to new users who may be looking for a place to discuss their Christian issues and Christian life that this is, instead, a site that serves as an objective observer of Christianity.

This change to our masthead would not, of course, be a miraculous cure-all for the common misunderstanding of our site and its purpose among new people who wander in here from Google searches. But it would provide a clearer indication of the nature of this site in its masthead.

(Note: I previously made this suggestion at the end of a Meta answer here.)

Edit: I have accepted curiousdannii's answer because I think his proposal for the masthead is much better than mine. As I said previously in a comment there, I would like it even better if the "about" I suggest were also added to the masthead, above "Christianity." However, if the consensus is that his proposal is best as-is, then I would willingly accept that as a great improvement over the current masthead.

I don't think adding "about" will really help explain much. I don't think anyone comes here thinking their off-topic questions aren't about Christianity.

But really, if any change were to be made, it should be to make the tour more prominent. The tour needs to be visible here: 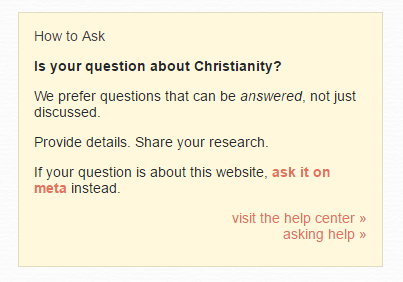 Perhaps there could even be some way of forcing new users to read the tour before they are allowed to ask new questions? But then how could we know whether they've actually paid any attention...

A man named Deming would call your proposal 'tampering' since the presumption is that the closed questions is due to our name/brand. Others might just call it an XY problem.

No, it's due to our rules / guidelines and how the community moderators (myself included) pursue adherence. I've noticed the latest jihad against old questions.

So they get put into the Close queue and community moderation proceeds on.

I recommend against this proposal.

Christianity.SE is fine, and any explanation about that "about" feature can be folded into the "About us page" or (as with all SE sites) users figuring out the norms here as people arrive and choose to participate. There is No Easy Button. And quite frankly, the community engaging the new users is better than trying a cosmetic fix.

People matter, and we should treat new users like people. That's not about rules or labels, that's something the community at large will/should take to heart. (And mostly, the community seems to).

Fun with data and inference

Do we have a high percentage of closed questions? Sure we do. Part of that is the subject matter itself: Christianity, on the internet, attracts a lot of low quality posting, and not just here. What we do, as a site, is do something about that.

Going back to usenet and newsgroups, through today, (goodness, has it really been two decades and more?) my obesrvation is that the topic itself brings out the worst in some people, but also brings out some great exposition, reflection, and discussion in others.

Close rules: if it's general SE policy, or site guidelines, then Once Again the problem isn't the title but SE rules.

I'd recommend not attributing to the title a problem cause by what's under the hood:

Comments from Laurent's answer (the one that I thought had inspired Lee to run this up the flagpole and see who salutes it, but then ... oops, time tags).

(@bruised reed) The topic is Christianity, the issue is that this is not a discussion forum, but a Q&A site with graded usefulness on answers (the Stack Exchange mechanics). This effectively applies a value sorting mechanism against a topic with hundreds if not thousands of varying perspectives all vying for the label "Christian" and disagreeing with each other about relative values. If you don't have a careful sorting mechanism with regard to this (the site standards) you quickly end up with a big mess (that's what happened in the early days of the site until they worked out how it could be done). – Jan 18 at 17:03

(@Matt Gutting) I've thought on and off about our name. What I concluded is that we do discuss Christianity, but we (like all other Stack Exchange sites) require answers that everyone regards as objectively true. I don't know how we can convey that idea in a name. – Jan 19 at 14:19

(@KorvinStarmast) Laurent, if you take the site name and emphasize "SE" it makes more sense for the site to keep it's name. The problem with any SE site is that for those new to the SE model, this not being an internet forum is confusing: that's a style people are mostly used to. I had to adapt, not the site, when I first began participating on SE sites. – Jan 22 at 19:42

For the sake of posterity, a comment under the original question is saved in this note since comments eventually go away.

Compared to other StackExchange sites, Christianity.SE has a very high percentage of closed questions. You say that like it's a bad thing. It isn't. The topic itself attracts an inordinate amount of noise, misinformation, opinion, baiting, argument, emotion, and trolling. (Point of reference, over 20 years of discussing a variety of things on BBS, news groups, and forums) Filtering out as much of that as we can is a GoodThing(TM), and supports the favorable signal to noise ratio the SE model prefers.

Not the answer you're looking for? Browse other questions tagged feature-request design site-branding .

102
Brothers, we are not Christians‼
15
Why does this site have such a high percentage of closed questions?
2
Should the site be re-named "Christian Doctrine" (not the url)?
2
Should we say we are a 'secular website'?
-2
Closing Opinion Based Questions and the new Niceness

102
Brothers, we are not Christians‼
3
How much am I 'trusted'?
2
Is the scope of SE Christianity too narrow?
12
Can we have a close reason for "Truth Questions"?
1
WHERE can we ask a truth or advice question?
3
Christianity "fish" badge appears in list of new badges for non-Christianity Stack Exchange sites
2
Should we say we are a 'secular website'?