For example, I am typing beginning and end smart quotes in the post creation/editing box by using Alt+0147 and Alt+0148, as follows: “ ” On the other hand, these are beginning and end dumb (straight) quotes: " "

What could explain that?

Here is a screenshot of what I type while editing a post, versus what appears when I post:

What I type before posting:

What appears after posting:

The primary font used to display text on this site is Lusitana. This is different from the one used on BH.SE (Helvetica Neue) because that site uses the standard Beta design (see this and this; you can also confirm by looking at the actual CSS for BH.SE and for C.SE).

Helvetica Neue supports curly quotes, but according to Google Fonts, Lusitana does not: 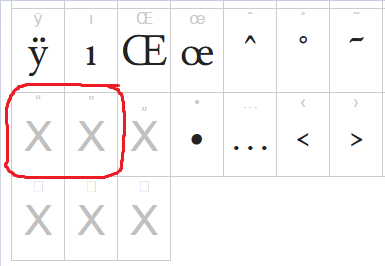 14
Updates to the site
10
Can we have a font with better italics?
5
Why do quotation marks look weird?

5
Why is the blog not themed?