When I look at my list of Stack Exchange achievements on most sites, I see a colored dot indicating that I have earned a new badge. Here is what it looks like on Stack Overflow (and every other site I have tried): 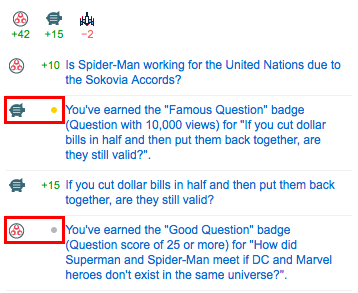 However, when I look at the same list of achievements on Christianity Stack Exchange, I see the "fish" (Icthus) badge, even for non-Christianity sites. 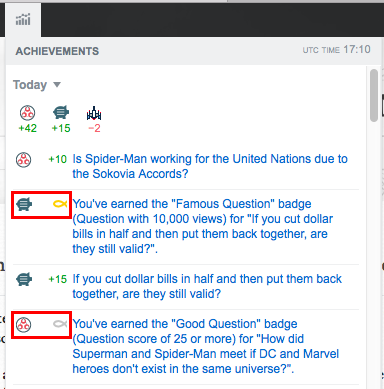 It seems like a bug to have a Christian fish badge for a question about Superman and Spider-Man.

The same thing happens in reverse for Christianity badges too. On Stack Overflow, it looks like this:

But on Christianity Stack Exchange, it looks like this:

This is actually an issue on all Stack Exchange sites, not just Christianity.SE. So the best place to report it would actually be Meta.SE, and indeed, it has been reported there a number of times:

The best thing to do is upvote that question and hope that it eventually makes the developers' to-do list. And if you want, install the user script that's provided in the answer to that question.

Not the answer you're looking for? Browse other questions tagged bug design .