Why even bother posting on this board?

I quit posting on this board months ago. Here's an excellent example of why.

Look at this question: Did Adam and Eve's Progeny Commit Incest? The poster asked if the children of Adam and Eve must have committed incest to get the human race started, and gives several reasons why he thinks they couldn't have, biological and moral.

I gave a reply stating why I thought those reasons were not applicable.

This answer was deleted by a moderator with an explanation beginning "That's not what the question was?"

It seems to me that that's exactly what the question was. The poster asked if X was true, and gave some reasons why he thought it must be false. I attempted to rebut those reasons, i.e. refute arguments why X could not be true. That of course would not prove it is true, but it seems to me to be highly relevant.

You may think that my arguments are weak or invalid. That's fair. A rebuttal would be highly relevant.

But when one spends considerable time composing an answer, and then a moderator comes along and deletes it for highly debatable reasons, one quickly concludes that it's not worth the trouble to post here. You could do a lot of work and then someone else comes along and just throws your work away.

Maybe you think most or all my posts on this board are unproductive, and you're happy to see me go. If so, fine. Obviously I don't fit here. Maybe there are enough people who accept this style of moderation and this board can flourish. I wish you the best, but I've lost interest in participating. It's too frustrating.

For those who can't see the answer: 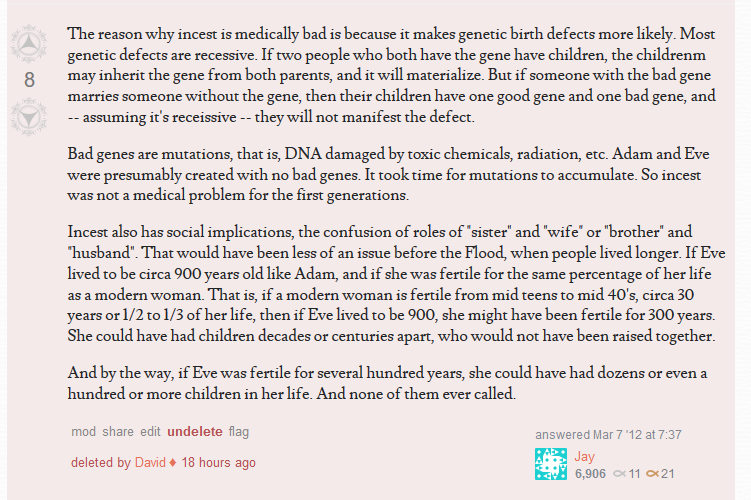 Your question is a fair one, and I'm glad you asked. Lee Woofenden pretty much covers what I'd have said about the site guidelines being different than they were back when you posted your answer.

When it comes to how we should handle good answers that answer something other than the actual question asked, we have a guideline defined here.

For the record, there are times when I really don't want to delete answers. When I ran for the moderator position, one of the questions that was asked was:

As a moderator, your actions now represent the community, so you will be held to a higher standard of behavior. You are an ambassador of trust, with the same sorts of rights that the official development team and community coordinators have. Sometimes the policies that the community has agreed upon in meta are at odds with our own personal standards. If that's the case for you, which policies do you disagree with and how would you go about changing them? If you agree with all of the policies, what would you do if another moderator set out to change one of the site's accepted standards?

Honestly, if I thought for a moment the site standards were going to be at odds with my own personal standards, I wouldn't have thrown my name in the hat. Should some standard come around that I have a hard time with, I'd most likely make my best possible argument, backed with post after post for precedent, to try to make my case. Such a standard would have to be one that I honestly think would be harmful to the site, not one in conflict with my religious views.

If site standards changed enough that I really had a hard time with them, I'd probably keep my mouth shut while letting the other mods handle those questions, and eventually step down. I simply don't want the diamond bad enough to compromise what I think is right.

In this case, it's not a situation where site policy is conflicting with my own religious beliefs/convictions. It's just that I don't like deleting posts that have earned people significant reputation points, particularly when the question and answer were on-topic at the time, but are off-topic/not within guidelines today. I just don't like it. But since I took the position as a moderator, my job is to adhere to site guidelines. All of them. Not just the ones I like.

With that knowledge, if you feel it's worth the effort, can I suggest you create another Meta post to address the question of what we should do about posts that were fine at one time, but are off/topic/not within current standards? You can use this as an example of such a situation.

In the meantime, I took the liberty of making a very slight change to your answer, to make it an actual answer to the question asked, and un-deleted it.

Added based on comments and new answers:

I think some of you are operating under the false assumption that I acted unilaterally. In both cases, the answers were flagged as "not an answer" by other members of the community. That alone means that I didn't act alone. I didn't seek out these answers, decide I didn't like them. Someone else, possibly several others, flagged them because they also recognized that these fall afoul of the site guidelines.

One of my assigned duties as a moderator is to evaluate flags and take the appropriate actions, not based on my personal beliefs. Rather, my only allowable criteria is to determine whether or not the flags are valid according to site guidelines. Those guidelines, again, were set by the community.

If someone flags as NAA, and it falls within the definition of NAA defined by the community, then I have to act. To not take action would be to show bias.

Granted, I'm far from perfect. I've made mistakes. Clearly the community felt I had done so here. Feel free to call me out when I do.

Because both answers ran afoul of the site guidelines on what the community, not me personally, decided as far as that particular guideline goes.

For the record, here are the meta posts that address this point. Take a look and then look at the question and your answer. maybe if you take the time to read the guidelines, you can at least see where I'm coming from. Maybe not, and maybe even if you do, you still won't like it.

Read the question carefully. What, specifically, is the question asking for? Make sure your answer provides that – or a viable alternative. The answer can be “don’t do that”, but it should also include “try this instead”. Any answer that gets the asker going in the right direction is helpful, but do try to mention any limitations, assumptions or simplifications in your answer. Brevity is acceptable, but fuller explanations are better.

In this case,. I go back to my original statement above:

Likewise, for user27239, an explanation of the biology involved is not an answer to a "yes or no" question.

Again, I deleted two answers from the opposite end of the spectrum. If that screams "bias" to you, then I'm not sure I know how to help you.

I've also bent over backward here to explain the rule, to provide links to the meta posts that define the guideline.

If you don't like the guideline, work to eliminate it. Attack the guideline, show why it's bad, provide a better alternative, and garner community support. Don't go around accusing moderators of being biased for following the guidelines that were set by the community.

Nothing would make me happier than to spend less time deleting content that others have worked hard on. It's the one thing I hate most about this gig. But until the community settles on a different guideline, I would be shirking my duties not to enforce the guidelines in place.

I can't comment on your answer and whether it was rightfully deleted, since it's not visible to me.

However, the question itself has now been put on hold as being a "truth" question, which is no longer allowed here. It's an older question (from 2011), and was asked before current site guidelines were put into place. For current standards of what's on-topic on Christianity.SE, see: What topics can I ask about here?

Of course, it's entirely up to you whether to post or participate here. But the site has changed a lot since you first joined. If you do want to stick around after all, I'd suggest reading the above-linked help article, and any related articles that may help reorient you to the way Christianity.SE works now. It would save you a lot of frustration and wasted effort in posting answers that may have been fine three or four years ago, but are no longer considered on-topic.

To some people, the newer site guidelines seem overly restrictive. I chafe at them sometimes myself. However, they've helped bring Christianity.SE in line with the general purpose of Stack Exchange, which involves maintaining a Q&A site where people can ask questions and get well-informed, well-referenced, objective answers.

Another benefit of the tighter rules is that Christianity.SE largely avoids the endless debates and flame wars that tend to mar Christian discussion sites. This is explicitly not a discussion site, nor is it a place to air personal beliefs and opinions. (Though some doctrinal discussion and debate does happen in the chatrooms here.) The newer guidelines for what's on-topic help to maintain Christianity.SE as a Q&A site rather than a religious slugfest.

Not the answer you're looking for? Browse other questions tagged discussion deleted-answer .

12
2014 Moderator Election Q&A - Questionnaire
11
Why is putting a question "on hold" preferred over simply correcting the question?
11
Are questions on a Creationist explanation for scientific observation on topic here?
12
What should we do about matching the viewpoints of askers and answerers?
-8
What policies do or could make a site like this "successful"?
12
When should the community flag an answer as "not an answer?"
5
Why was this question disfigured instead of just closed?

5
Why the double standard on question closing?
1
Why delete Abraham/Sarah answer?
8
Should we avoid "refute this"-type questions?
8
Refute this vs Why do they believe this?
2
Lets talk about this question and my answer to it
1
Questions closed for wrong reason
4
Should this question have been closed as a pastoral advice question?