Why did a Moderator respond this way after declining my flag? Please help me understand

Please help me understand: Why did a Moderator respond this way after declining my flag?

Because of my continual perceived unpleasant and negative interactions1 with @Ward, I thought of a way perhaps the interaction might be improved. Therefore I viewed his profile and his posts and reviewed this answer of his.

I decided to edit his answer and hinted to him in my comments what "might improve" his answer - please note that would mean a complete rewrite of his answer - and I then upvoted.

What I had hoped to achieve was not accomplished because @Ward rollbacked his post to a previous position. I then downvoted and flagged the answer it is very low quality, selecting from the 5 choices available to me. 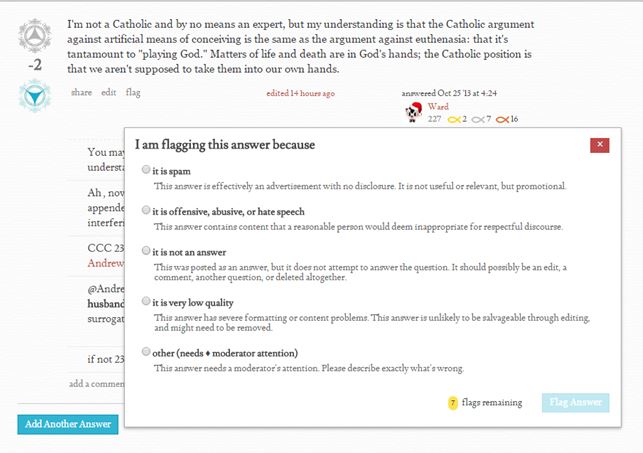 A moderator declined my flag.

Please help me understand. I am thinking that the one who needs to answer here is the Moderator who took the action.

cf. @Ward's answer: But if you actually read the text of the flag you cast (his emphasis).

Advances in technology have now made it possible to procreate apart from sexual relations through the meeting in vitro of the germ-cells previously taken from the man and the woman. But what is technically possible is not for that very reason morally admissible. - cf. My answer.

Ward has since edited the answer. It at least has a source, though I remain unconvinced that his answer is any good or even correct. However, that is not why I championed its deletion earlier. I no longer think it should be deleted.

I did downvote it myself. I did not flag it because I think I first saw it recently in the review queue.

The post is very low quality. And if not low quality, it's not an answer, being that it is just an impression the OP holds. It would pass as a comment, but not an answer. We regularly delete answers exactly like this.

If I were a mod, I'd probably have deleted it by now. It's pretty clear that Ward has no intention of self-deleting nor improving it. Especially in light of the fact that FMS basically gave him the answer in his post, but then he rolls it back.

So, yeah. I agree. It should be removed because:

So why are we spending so much time talking about the flags and how to use them and all that nonsense when clearly the point of your meta post is that the answer is crap and should be deleted, but the mods have chosen not to do so?

It's not clear what you think the problem with the answer is - buried in this question you seem to hint that the answer is too much of an opinion. Fair enough, if you don't think it's a good answer, a downvote is appropriate.

But if you actually read the text of the flag you cast, it says:

So none of the three examples of what "very low quality" means apply, therefore the flag was declined - with boilerplate text explaining why. As the canned message says, flags are for dealing with things that can't be dealt with by high-rep users.

To be perfectly frank, it's not really a great answer, and I don't really think Ward would disagree.

The main problem is that it's only expressing his personal understanding. It needs references.

What you could've done was to comment asking for some references for his claims. You could potentially even have flagged and asked for the needs-sources note to be added to the answer, but that's really a measure of last resort, and I'd usually only do that for new users who don't look like they're coming back.

3
When is it appropriate to flag a answer?
11
Should we be deleting blatantly non-Christian answers?
12
Can we reverse the trend on low quality posts?
5
How does flagging and moderation work here?
3
Legitimate grievance, or am I just being a 'whinger'?
7
How can we clarify what are we actually asking, if it's locked before given any chance to respond?
4
Why is there no auto delete for some "answers"?