Why was this question disfigured instead of just closed?

I'm trying to figure out why a question was treated the way it was. Here is my original: 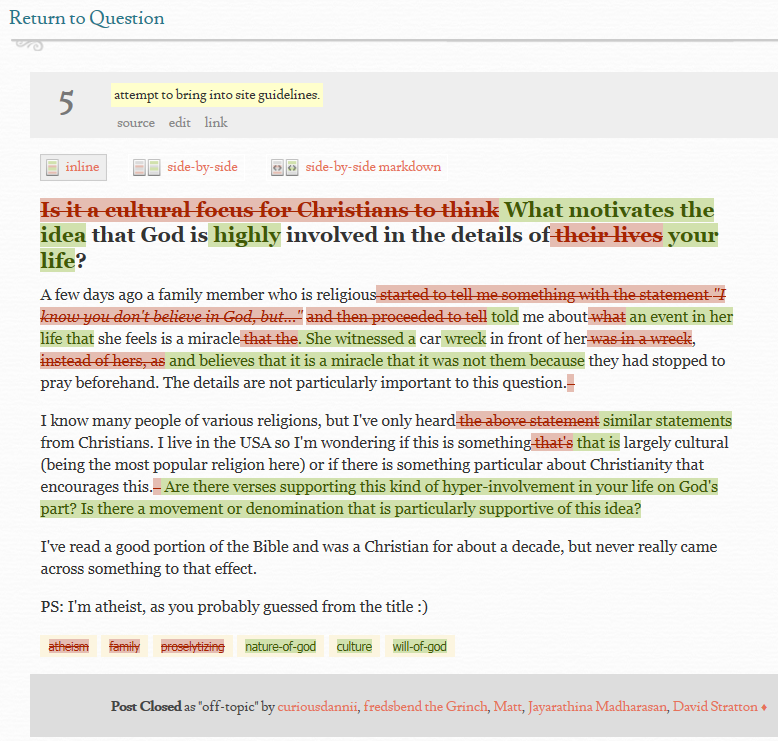 Here is the question now.

I'm quite familiar with the Stack Exchange format, so I'm kind of curious why the following sequence of events happened:

If it was off-topic to begin with, why not just let me know and close it, instead of editing it to the point the question is completely different than the original?

Disclaimer: I'm not a regular here, but am active on other SE sites. So, this is an outsider's perspective.

First, I would like to commend the editors for making the effort to salvage a question. Edits are good. Edits (generally) raise the quality of a site.

However, it is better to point out to an OP, particularly one who is new to an SE, how they can improve their post themselves when it is off topic. It's an important part of a new user integrating themselves into the community. Writing bad questions and then improving them is part of the learning process. Very little guidance was given to OP about how to make his question on topic. (To be honest, I still don't understand exactly why it is off topic. It seems like a clear and objectively answerable question to me, but I admittedly know little about your community. So, that's another matter entirely.)

So, edits are good. Closing and commenting a new user is better. Don't be so over eager to "help" a new user that you end up alienating that new user. Guide and push OP in the right direction rather than bomb the post with edits.

Now with my two cents out of the way, let's take a look at the original post versus the question as it is now.

I removed the first and last sentences from the original post to get a good diff on it. (They were mostly noise anyway and rightfully removed.) Once I did that, you can see that the question is not as different as the SE Revision history makes it out to be. In fact, they are very similar and the post has been quite improved. I do feel that perhaps the cultural part of the question was lost, which is concerning, but all in all, this is the same question that OP posted.

Originally, it wasn't clear what the question was - buried in the anecdote was "I'm wondering if this is something cultural"

Someone interpreted that (partially based on comments?) as "Is it a cultural focus for Christians to think that God is involved in the details of their lives?" and changed the title. You say that change was fine and it made the question match the first answer.

The most recent edit doesn't seem to change the question, it fixed some of the bad tags and is an attempt to make the question more specific and a better fit for SE. That's the whole point of allowing edits by anyone - as originally asked the question wasn't a good fit, the edits make it possible that it will be reopened.

Not the answer you're looking for? Browse other questions tagged discussion editing off-topic .

11
Why is putting a question “on hold” preferred over simply correcting the question?
8
Why even bother posting on this board?

9
Did “Why is the Trinity a Trinity?” require an edit?
11
Are we officially ready to add “Truth question” as the third off-topic question close/on-hold reason?
1
Why was this closed for being “truthy” when it's anything but that?
1
In what way was my question about some Catholics and labels too broad and how could it be fixed?
3
Is this “confession question” back on-topic?
2
Is this question on topic?
7
Let's close the “Biblical basis for humans becoming angels” question
0
What exactly is “off topic” on this site?
1
Can we discuss translation issues?